We embarked on a 4 hour journey to Ubud, the breeze as we rode was lovely but it was still hot and humid, and every bump in the road was felt. We checked into our pre-booked expedia hotel 'Kampung Ubud Hotel and Spa' at £20pn and we booked 2 nights.

Kampung Ubud Hotel and Spa, I even treated myself to a hair treatment at the spa as my hair is rather damaged and brittle at the moment, I don't know if the treatment will do much but it felt lovely to be pampered.

Had an exceptional meal at 'Laughing Buddha' restaurant which is at the top end of Jalan Monkey Forest (opposite end to Monkey Forest).

The Sacred Money Forest Sanctuary is a must do in Ubud, it is famous because there is a small rainforest dwelt by a group of around 200 monkeys and other tropical animals. It costs just 30,000 Rupiah (£2) to look around at the forest, temples and of course the monkeys, of which you can feed with bananas bought on site, then as you'll see below, you can hold the bananas up high and the monkeys will happily jump on you to eat them. Just be aware though, they are over fed and can get fed up with tourists poking bananas at them, one tried to lunge at me!

We had decided we wanted to scale Mount Batur for the sunrise trekking tour. Shaun and Jodie completed it last year and loved it, we had declined as we had just completed the trek around Mount Bromo in Java, but now we were up for it, at 450,000 Rupiah (£30) including air conditioned coach to and from hotel, water, snacks and breakfast it sounded good. Our tour was with 'Bali Uma Kutuh' but it's not an exaggeration when I say that there is tourist stalls back to back along Jalan Monkey Forest all competing for your custom and offering competitive rates which can be haggled down. You will need to wear hiking shoes (we wore trainers) bring a jumper/ jacket and wear long pants.

Our pick up was at 2am and we were driven 1 hour before stopping for ate fried banana and coffee in weird side alley in the darkness, then continued to Batur village in Kintamani for around 3.45am where we received a safety briefing and met our guide.

We trekked in the pitch blackness for a long time on flat ground which then turned steep and hard to climb up, we were literally clinging to the rocks to hold on. Then it just got steeper and steeper, we were pretty much in darkness the whole way, all you could see was a path of nodding lights from everyones torches. We couldn't see how far we had come nor how far left. We rarely stopped, it was humid and already feeling the sweat on our backs under our backpackers.

We continued until around 6am when the sky started to turn from black to inky blue, by the time we reached the top a glorious sunrise was already starting to turn the sky to a pinky orange, we got to the top of the summit at 1,717 metres and rested whilst marvelling at the sun rising behind Mount Agung the highest point on the island.

We made it! We had climbed another volcano! We aren't the most fittest so it goes to reason it can't be that hard to climb.

After admiring the tranquil settings we trekked around the crater, where we also had our packed breakfast of boiled eggs, or actually the resident monkeys ate ours as we weren't feeling it.

Around 8am we begin our decent it became apart that it was easier in the dark as you didn't see where you were going, in the light of day it looked so steep to climb down, others around us were visibly upset and took to crawling down on their bums, the rocks were crumbling but soon enough we were back on terra firma.

Back in the coach everyone fell into a deep, worthy sleep. We were soon awoken as we had reached one of the islands famous coffee plantations, where Luwak coffee is made, more on that later though, as we didn't sample any coffees this time around...

We arrived back at hotel for 1030 where we lay comotose for a while.

Then it was time to check out of our hotel and also around the time we were expecting Shaun and Jodie yay! We patiently and excitedly awaited their arrival, then they came whizzing past us on their scooter, they had made the 2 hour journey from Kuta earlier in the day.

We checked into 'Bakung Ubud Resort and Villa' around 5 minute drive from Monkey Forest Road, the hotel was £26pn where we would stay for 2 nights, it was a gorgeous room with balconies over looking the rice terraces, the place was devine!

You can't come to Bali without going to 'Frozen Yogi' at least twice, we love it there, and priced so much better than the frozen yogurt bars in Kuta. 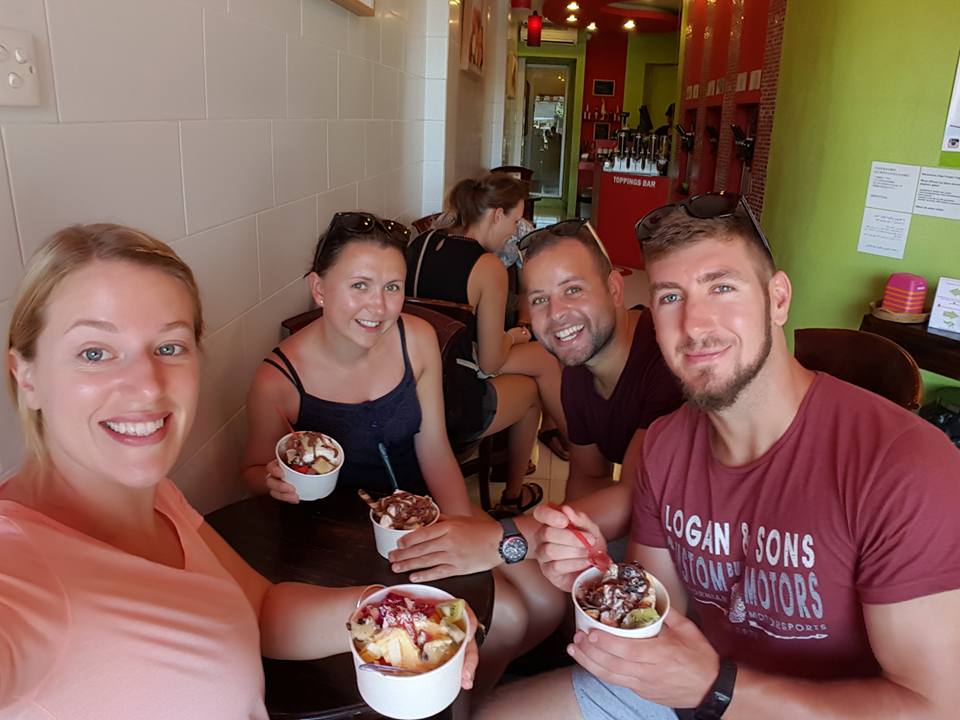 We ditched the scooters for the day in exchange for a private, air-conditioned car to take us on a tour of central Bali. The tour cost around £40 pp which seemed a lot but having completed the long day we came to the conclusion it had been worth it. As with all tours, if you look around you can haggle for a better price.

Most of the stops on the tour were active worship site for Hindu devotees, it is required that you dress properly. Either long pants or a sarong should be worn to cover the knees this is males as well as females.

Stop 1 - 2km out of Ubud Goa Gajah, or Elephant Cave. Built in the 9th century, it is primarily a grotto with uncertain origins, but it's believed that it once served as a sanctuary for Hindu priests to meditate or even sleep.

Stop 2- Gunung Kawi is an 11th-century temple and funerary complex that is spread across either side of the Pakerisan river. It comprises 10 rock-cut candi (shrines) that are carved into some 7-metre-high sheltered niches of the sheer cliff face. These funeral monuments are thought to be dedicated to King Anak Wungsu of the Udayana dynasty and his favourite queens and sons.

Stop 3- Tirta Empul Temple is a Hindu Balinese water temple, famous for its holy spring water, where Balinese Hindus go to for ritual purification. The temple pond has a spring which gives out fresh water regularly, which Balinese Hindus consider to be holy or amritha. ('Tirta Empul' means Holy Spring in Balinese).

Stop 4 - And then we were back at another Luwak Coffee Plantation. The Luwak coffee is made from coffee cherries which have been eaten and passed through the digestive track of the civet. (Civets look like cats, and are nocturnal). After they have been collected, the beans are processed hygienically, and given a medium roast so as to not destroy the complex flavors that develop through the process. We also learned about the spices that are grown at the plantation, before sitting down to try a tasting selection of coffees, and teas. They were all surprisingly tasty, especially the coconut coffee and the spicy ginger tea.

Stop 6 - The last destination was the Tegalalang Rice Terrace, this area is famous for its beautiful view of rice terraces. Now you can admire the view from the road side, but we seen others climbing through the terraces so joined them, it was a pretty remarkable place, I didn't mention to the others but I imagined there would be snakes or rats lurking, but thankfully we didn't see any.

We had a great time on our tour and indeed in Ubud, it's a total contrast to the buzz of Kuta. We spent the rest of ayr time eating food and magnum ice lollys and having a massage we'd rather forget. We were all seated together and enjoying a half decent massage when they brought out wooden hammer like devices and started whacking us on the soles of our feet, it was painful but we were too in shock to say anything!!

Spending A Day In The Lake District